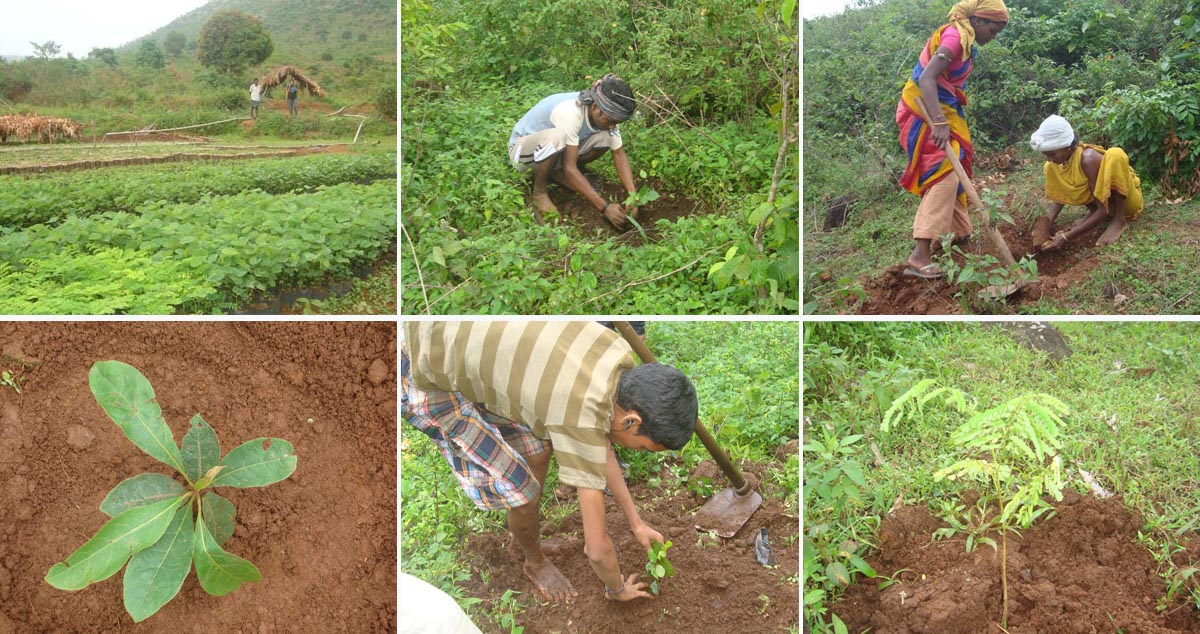 Why trees?
According to Mr. R.C.S. Bell (first District Magistrate and Collector, Koraput), the name of the town itself is derived presumably from a tree, nux-vomica, that must at one time have been prominent near the site. But today, not a single tree of nux-vomica can be found near the town, fears Mr. Bell. Koraput, known for its holy temples, is also a tourism place, surrounded by mountains, thick forests and waterfalls. Many different tribal communities (Adivasis) reside in this district. The traditional culture, knowledge and subsistence of the Adivasis are closely connected with local ecosystems. The local farmers state that their farms are influenced by the culture of the forest around them. “As the forest is a diversity of plants, the farm is a diversity of crops. The forest provides everything, including the seeds for the next year, which we would be using throughout the year.”, said Sunamain to indiaclimatedialogue.
Most of the area was covered by thick forest until a few years ago. According to the Odisha District Gazetteers, urbanisation, industrialisation, and natural calamities, have led to a reduction of forest cover by 23.1% between 1931 and 2008, indicating massive deforestation in the area. Due to the effects of deforestation, the inhabitants are forced to migrate as an involuntary survival tactic. This has also led to climatic changes in the region, causing irregularities in the rain pattern, while also negatively impacting the economy of the people. Since Koraput is a cyclone-prone area, it is frequently visited by Monsoon storms, leaving behind lethal diseases like Malaria. Realising the need for plantation, The Food and Agriculture Organisation (FAO) of the United Nations has recently accorded the status of Globally Important Agricultural Heritage System (GIAHS) to the traditional agricultural system being practiced in Koraput region of Odisha.
The district, which was once known for its vast variety of flora and fauna, now presents a very disappointing picture of receding green cover and loss of faunal beauty, many of which have disappeared permanently. According to the Orissa District Gazetteer, Koraput’s economy was dependent on the export of surplus grains, turmeric, saffron, etc. The tribal inhabitants of the district, are now in the clasp of poverty and have very meagre source of income. Reforestation would help the tribals revive their ancestral methods, providing sustainable means. Thick shrubs would also help break the speed of the rain water during cyclones, and protect the millet and other crops. A survey by DownToEarth also mentions the importance of trees to the traditional houses, which acted as natural barriers to protect forest dwellers from cyclonic storms.
The South Orissa Voluntary Action Koraput highlights, “The District has 18 large projects with about 500,000 acres (2,000 sq.km) of its total area of 26,961 sq.km (or 7.42 per cent) occupied by these schemes. More than one lakh tribals have been deprived of their land including 400,000 acres of forest on which they are dependent for livelihood.” The trees to be planted in the district would empower the tribals to regain a steady source of income and reduce the dependency on their landlords.

Social Impact
On average, a tree offsets 20 kg of carbon and produces 118 kg of oxygen every year upon maturity. The trees reverse the effect of adverse climatic conditions and natural phenomena, thus, protecting the community at risk. The project has so far provided over 11,400 workdays of jobs to the rural community, women being the key beneficiaries. The local communities also earn wages from the upkeep of the saplings and benefit from the use of the non-timber forest produce. The tribal communities have perceived a significant reduction in soil erosion in the area over time and regeneration of the cultivated land is taking place in a slow but consistent manner. This has provided respite from the incessant crop loss along with providing forest products as an alternative source of livelihood. With the new saplings growing, the source of income for the households is maintained thus making it sustainable.

Total 25,000 saplings have been planted in 43 hectares of common land in 2 villages, namely Tankubeda and Madmagandhi in 2017-18. Decentralised nurseries were raised in these two targeted villages. The plantation process involved identification of planting patches and its demarcation with the help of revenue officials. The village institution also nominated experienced people for initiating nursery activities.These multiple efforts have ensured the survival rate of 93% even in adverse conditions.