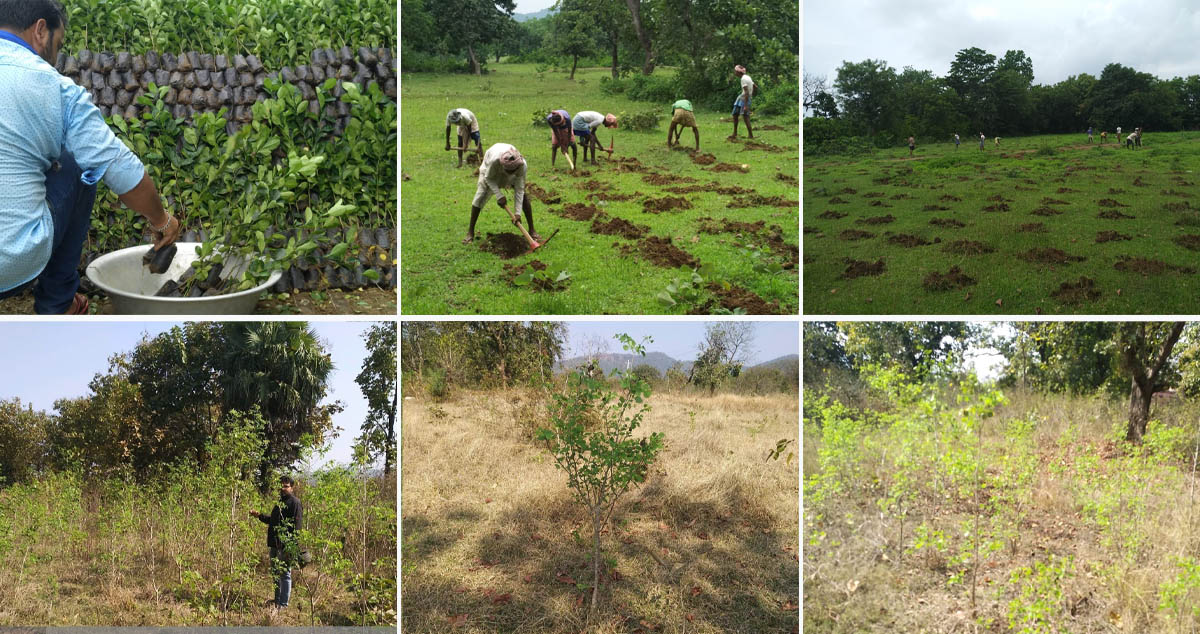 Why Trees?
SanctuaryAsia in April 2011 (Human-elephant Conflict in India") that the plantations raised in Jaldapara Wildlife Sanctuary succeeded in encouraging the animals to stay within the park, reducing the potential for human-elephant conflict. The 'Right of Passage' study published by the Wildlife Trust of India in collaboration with Project Elephant and the U.K.-based NGO Elephant Family in August, 2017 points out how constricted corridors have become since 2005 - about 74% corridors are of a width of one kilometre or less today, compared with 45.5% in 2005, and only 22% corridors are of a width of one to three kilometers now, compared with 41% in 2005. The planting of trees will help augment the size of the corridors increasing the sheltered and screened area for the elephants.

In their research paper "Feeding Preferences of the Asian Elephant (Elephas maximus) in Nepal" Raj Kumar Koirala et al found that elephants preferred browsed species of plants during the dry season, while browsed species and grasses were both important food sources during the rainy season. Elephants targeted leaves and twigs more than other parts of plants. (Browsing is a type of herbivory in which a herbivore, such as an elephant, feeds on leaves, soft shoots, or fruits of high-growing, generally woody, plants. This is contrasted with grazing, usually associated with animals feeding on grass or other low vegetation.)

In a research study published by Kalpana K. Mohapatra, A.K. Patra and D.S. Paramanik on Food and feeding behaviour of Asiatic Elephant (Elephas maximus Linn.) in Kuldiha Wild Life Sanctuary, Odisha, India consumption of tree species by the Indian elephant was found to be 56% as compared to shrubs (20%), herbs (14%) and climbers (10%). Tree species such as Mahua (Madhuca indica) and Mango (Mangifera indica), Bael (Aegle marmelos), Ber (Ziziphus mauritiana) were found to be the extensive part of their diet. The Asian elephant distinguishes itself from its African counterpart because of its dependency on arboreal forests as opposed to grasslands. Due to the variation in habitat and climatic conditions prevalent across the two continents, the elephant population in Asia and more specifically India, depends on its tropical trees—consuming twigs, branches, stems, root, flowers, fruit etc

Elephants are also one of the significant ways in which trees disperse their seeds; some species rely entirely upon elephants for seed dispersal. Wherever they live, elephants leave dung that is full of seeds from the many plants they eat. When this dung is deposited the seeds are sown and grow into new grasses, bushes, and trees, boosting the health of the ecosystem. Trees for elephants™ will create a more suitable habitat with improved food sources for elephants, reduce the existing human-elephant conflicts and help the natural regeneration of forests.

Social Impact
Plantation of 750,000 trees will help expand forest corridors and restore elephant migration routes between fragmented areas. Growing trees providing fruit and feed for elephants that can reduce crop raiding thereby protecting the income of the Santhal and Munda tribal communities in the area.

Villagers from Laylam village will participate in the entire process of plantation activity such as the selection of the land, nursery development, pit digging, plantation and nurturing planted saplings. Around 61,875 workdays of jobs will be created in the nursery and planting activity alone; additionally, there will be indirect employment and extra revenue from flowers, fruit, fodder, and fuel. Planting trees will protect the watershed, improve groundwater table and reduce the impact of soil erosion. The local community will also benefit from fruits, flower, fodder and fuel, and the trees will absorb about 15 million kilograms of carbon every year when mature.

A total of 130,000 saplings were planted in the Sighbum district of Jharkhand in 2018-19. Plantation of endemic species, weeding and seeding apart from allowing natural regeneration are the methods adopted for the restoration of degraded areas. The land undertaken for plantation comprises of diversified variety such as open scrubland, hilly terrain, and other types, making it less fertile. Multiple efforts by Grow-Trees and the planting partner have ensured the survival rate of 92.15%.

Total saplings planned to be planted were 100,000 in all locations in 2018-19 but some plants were destroyed by wild elephants. Hence, in order to maintain the ratio, 30,000 saplings were additionally planted due to which the total plantation in 2018-19 was found to be of 130,000 saplings and the verification has been done for the same.

The planting has been carried out as per the plan and the number of saplings physically verified agrees with the number of saplings planted (as per the report of Grow-Trees planting partner). We are of the opinion that looking to the steps taken by Grow-Trees and its partner organization, i.e., location of the site, encouragement to planting and positive response from the village to grow, nurture and monitor the planting, the result of the activity will be affirmative.