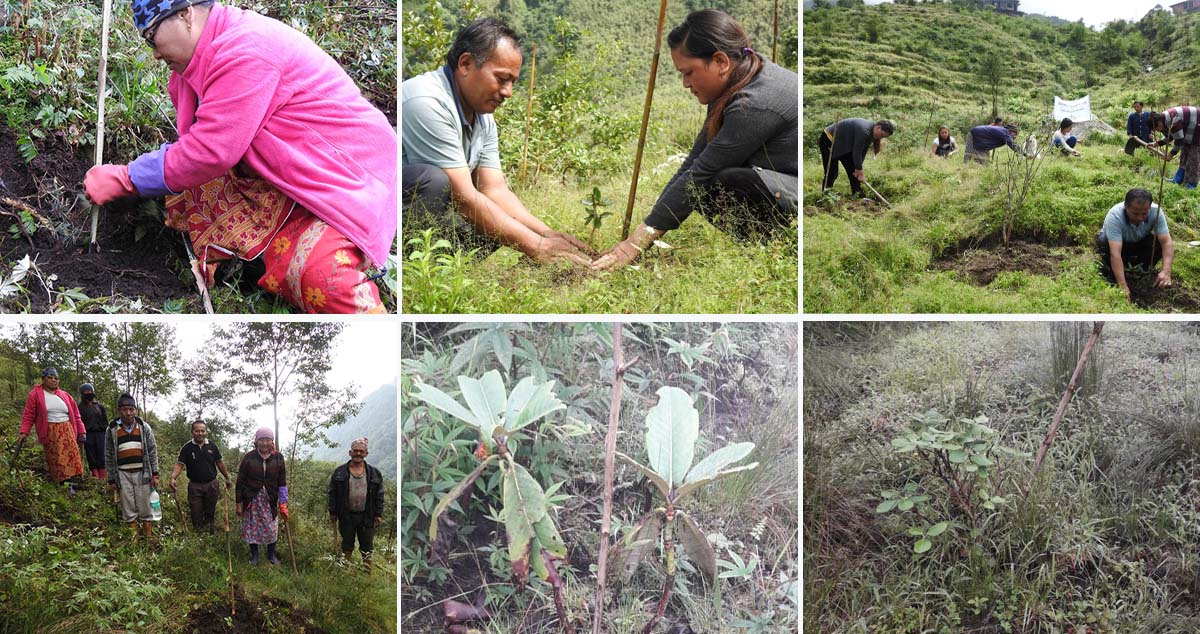 Trees for the Himalayas

Why Trees?
Zuluk, which is situated in the Eastern part of Sikkim is one of the most beautiful and scenic destinations in the region. It attracts tourists from across the world and is known for its prolific home-stays. The Sikkim Human Development Report 2014 recognised tourism as one of the potential sectors for growth and livelihood creation. The tourism sector has emerged as the vital industry of Sikkim, in recent decades, providing direct employment to more than 40,000 people. Owing to its popularity among tourists and the involvement of local communities in the sector, the Government also plans to encourage ecotourism and add new destinations, which also include the old silk route that passes between East Sikkim and Tibet. Plantation of trees with the help of Zuluk based Self Help Group, at the fringe of Sanctuary, will help in the ecological and wildlife restoration, and in improving the quality of life of local communities, making them more self-sustained.

India has two out of the eighteen biodiversity hot-spots in the world located in the Western Ghats and Eastern Himalayas. As per the Sikkim ENVIS Report, Sikkim covers only 0.2% geographical area of the country landmass, but has tremendous biodiversity and has been identified as one of the hot-spot in the Eastern Himalayas. The presence of high altitude lakes not only attracts tourists but also acts as a biodiversity hot-spot for migratory birds. However, the Himalayas are continuously under global pressure of climate change, which is adversely impacting its fragile ecosystems, rich biodiversity and sensitive local livelihoods. Forests and climate change are intimately intertwined. According to the United Nations Environment Programme, the forests capture atmospheric carbon dioxide at a rate equivalent to about one-third the amount released annually by burning fossil fuels. Stopping deforestation and regenerating forests, therefore, could provide up to 30 per cent of the climate solution.

Social Impact
The tree plantation helps in promoting sustainable eco-tourism and wildlife tourism by improving the overall ecological health and enhancing wildlife habitat in a particular area. The plantation project of 10,000 trees in Zuluk area is expected to create around 1200 workdays among the locals - including women self-help groups. Locals are the ones that know their forests the best and that’s why they are made to get involved in plantation activities starting from the digging process to the maturity of trees. Through trees, the local communities will be able to attain sustainable income sources in the form of timber-based produce and non-timber based produce. In terms of carbon offsetting, 10,000 trees are going to offset approximately 200,000 kgs of carbon dioxide annually, upon maturity. Additional canopy cover improves habitat for indigenous wildlife including the endangered and endemic, the state animal Red panda along with other associated wild animals.

Several studies have also shown that the planting of trees ensures that the rain droplets sink into the soil rather than flowing above ground, thus, increasing the groundwater table through water recharge. These trees will also help in conserving the local flora and fauna by providing them with adequate food and natural habitat sources.