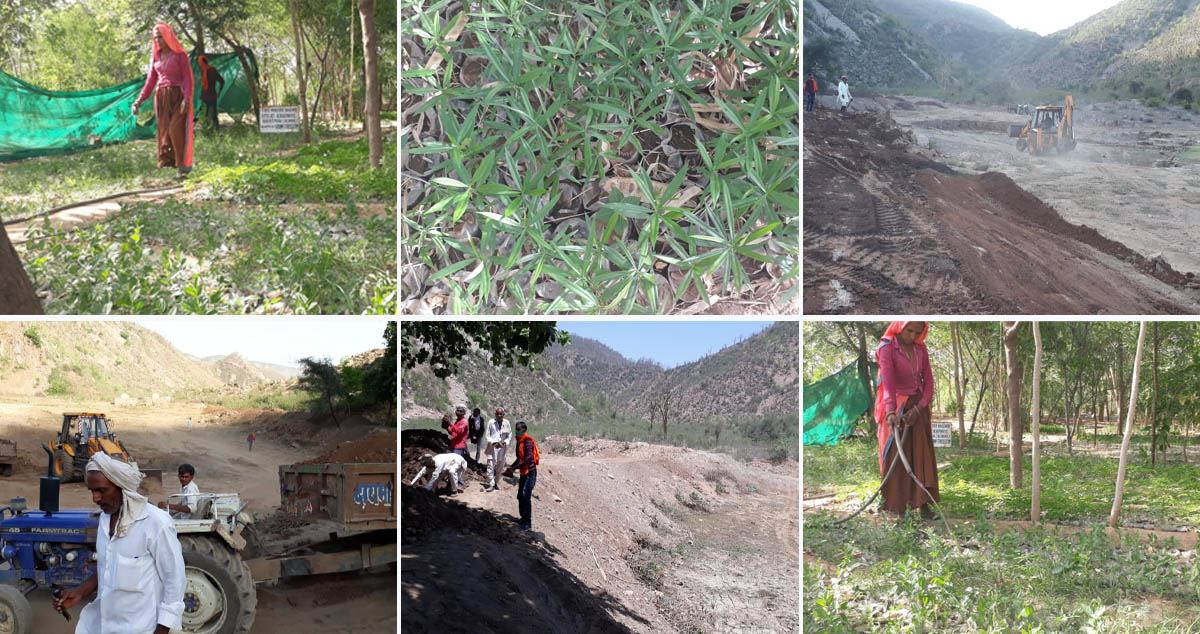 About the Pond
The project involves enlarging an existing pond in Doba Village, having a population of about 1,076 people among 213 households (Census 2011), from a capacity of about 800,000 liters to a capacity of 9,400,000 liters. The de-siltation process alone provided 325 workdays of rural employment to the local villagers, who are all tribals.
The pond, which is based on surface runoff of water, will be enlarged to a length of 400 ft, width of 25 ft and depth of 10 ft After the enlargement, the water pond should be able to suffice for the needs of the villagers throughout the year.

Why Trees?
The area around the Sariska Reserve is rich in mineral reserves and thus, illegal mining has continued in spite of the ban on such activities, which has proved to be a major threat to the tiger population (TNN, 2003). Abhishek Harihar, a tiger scientist for Panthera, a global wild cat conservation organization, states that poaching and infrastructure development act as the greatest threat to our forests and wildlife. Conservation efforts are failing due to the prevalence of poaching. The tree planting will improve the habitat for tigers providing them with vegetative cover
Researchers also point to the importance of tiger conservation, owing to their ecological as well as their economic value. They form a very important part of the cultural heritage of India. Their habitat in the dry deciduous forests of Rajasthan enables them to hunt, reproduce, and camouflage from potential threats. Thus, trees are essential for tiger conservation as they provide shelter and forage for the animals that tigers survive on.
Trees are also essential to the rural communities, for their survival as well as economic sustainability through fruits, fuelwood, fodder, and help improve water catchment. The importance is spoken about by various researchers like Pant (1980), stating that trees provide not only firewood but also mitigate floods and disasters.

Social Impact
The communities will participate in all activities that are imperative for the rejuvenation of the lands and wildlife such as planting trees, setting up a seed bank, building and maintaining ponds, and water harvesting. Many local species which include fruit trees and medicinal plants have been reintroduced in the areas and people are encouraged to use these resources judiciously, a step that will help preserve the biodiversity of the area and enable the local community to utilize the forest produce to generate revenue.
Due to the plantation and pond enlargement, approximately 2,780 workdays of jobs will be created, mainly in the nursery raising, planting activities and de-siltation of land. Major beneficiaries of such employment opportunities are rural women, who gain an additional source of income from these activities. According to the forest department, the tigers ST6 and ST10 along with increasing peacock and deer population have been sighted in our previous project area adjacent to the current location due to the restoration of their habitat. The project aims to replicate a similar impact in this region as well. Enhancing and strengthening faunal diversity will be contributed to the inflow of tourists in the area boosting nature-based tourism.
The lack of tree cover in Rajasthan makes certain sections of the state prone to flooding from moderate to heavy rainfall as seen in the flash floods in Alwar in the year 2005 (TNN, 6 dead in Alwar flash floods, 2005). Tree canopies intercept rainfall, reducing the erosive effect of the rainwater on soil and slow down the accumulation of water in low lying areas. Loss due to landslides and soil erosion is triggered by the floods (Bengwayan, 2018). The trees planted, thus, will not only contribute to the conservation of wildlife but will also provide safety against natural disasters.