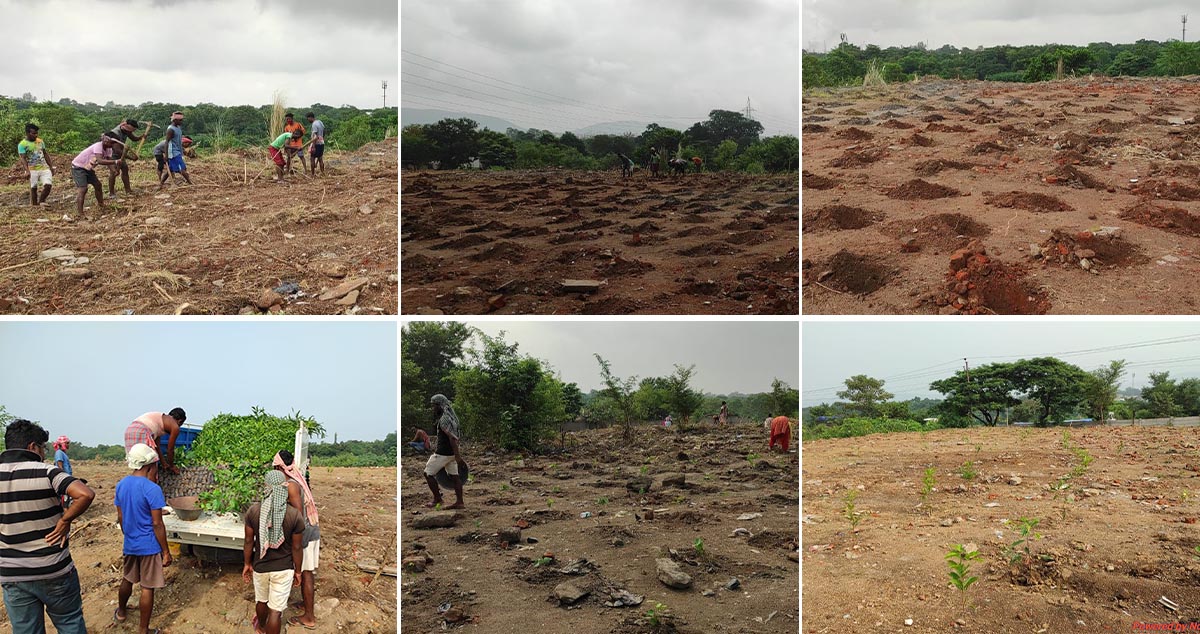 Why Trees?
Jamshedpur, named after the founder of the Tata Company, Jamshetji Tata is the highest populated city in the state of Jharkhand. It is synonymous with the steel industry it houses – the eighth largest manufacturing company in the world. The areas surrounding Jamshedpur are rich in minerals, including iron ore, coal, manganese bauxite, and lime, and host industries ranging from iron and steel, truck manufacturing, tinplate production, cement to other small and medium scale industries revolving around these products. However, being the industrial hub of the country comes with its own disadvantages. Owing to its multivarious factories and subsequent rise in population, the region is now prone to poor Air Quality Index (AQI). With a below average AQI, the environment is considered to be "Unhealthy" and dangerous for children and the elderly.

Due to urbanisation and massive deforestation activities, the cities have lost major parts of their greenery, which is now affecting the weather regulations. Trees are the most natural way of removing toxic agents from the atmosphere and have gradually become a necessity in and around the cities of India. With the rising air pollution levels and land degradation, reforestation has become a necessary measure for the preservation of the ecosystem. The Society for Ecological Restoration says that development is incomplete without the inclusion of the ecology and promotion of sustainable development. Plantation of mixed species will balance the nutrient content of the soil, increase its nitrogen-fixing capability, produce root exudates, and provide protection from pests and diseases. By acting as carbon sinks, trees help to compensate for the greenhouse effect through the sequestration of atmospheric carbon dioxide.

Further, these trees will prove beneficial in reducing topsoil erosion, decreasing the force of storms and down water runoff which in turn will help to replenish the groundwater table. Roots are especially beneficial for removing harmful nutrients from the aquifers. This also results in the overall reduction in street flooding and sedimentation in streams.

Social Impact
The planting of 12,000 trees near the urban landscape of Jamshedpur will help in increasing forest cover for nearly 10 acres of land, improving the habitat for indigenous wildlife species. The trees will help to improve the overall air quality and ecosystem. They will help to sequester about 1,000,000 pounds of atmospheric carbon dioxide annually (average 50 pounds of carbon dioxide sequestration per tree per year - Forestry Research and Engineering, May 2018). Trees will aid in removing particulate matter from the atmosphere, particularly small particles that are responsible for major air-pollution-related health hazards. Trees along urban areas can reduce the presence of fine particulate matter in the atmosphere within a few hundred meters of the plantation range.

Members of the rural communities will participate in the entire plantation process, such as the selection of the land, nursery development, pit digging, plantation, and nurturing the planted saplings. Around 1,600 workdays of employment will be generated in the nursery and planting activities alone. Additionally, the mini forest will generate sources of indirect employment and extra revenue from flowers, fruit, fodder, and fuel. Planting trees will protect the watershed, improve the groundwater table, and reduce the impact of soil erosion.

RANI PRIYANKA BODRA has GIFTED A Bountiful Tree
Ajit Chandgude has OFFSET with A Thicket of 5 Trees
Amit has GIFTED A Grove of 10 Trees
Audit for Trees For City, Jamshedpur

Experts from Grow-Trees.com’s in-house planting team conducted an audit of the plantation in Jamshedpur. In the monsoon of 2020, a total of 12,000 saplings were planted in Jamshedpur City's mini-forests. Saplings were chosen based on the ecological conditions and the success rate of the local species that survived in the area. Planting endemic species, weeding, and seeding, as well as enabling natural regeneration, are some of the techniques used to restore damaged areas. These efforts have yielded a 100 percent success rate, and the saplings are flourishing.

The planting has been carried out smoothly, and the number of saplings physically verified matches the number of saplings planted. We believe that the outcome of the activity will be promising based on the actions taken by the Grow-Trees plantation team, such as the location of the site, encouragement to planting, and a dedicated on-ground team to nurture, monitor, and maintain the plantations.